Webcomic / Tales from the Pit 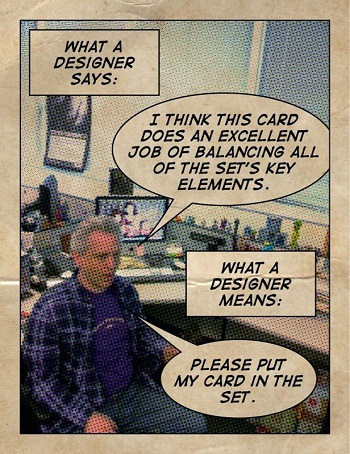 Tales from the Pit is a Photo Comic written by Magic: The Gathering head designer Mark "MaRo" Rosewater, giving a humorous behind-the-scenes look at life amongst Magic's creators. ("The Pit" is the name of the part of the office where the R&D team works.) The comics are created by adding captions and Speech Bubbles to photographs and stylizing them with an iPhone app so that they look like panels from a Comic Book.

The full archive, along with Mark's responses to reader questions about Magic, can be found here

on his Tumblr page; for just the comics, use this link

Tales from the Pit contains examples of: