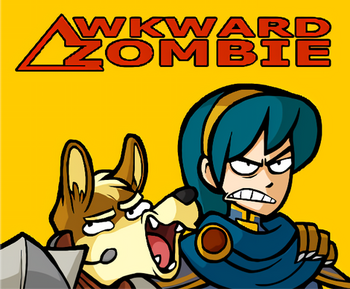 is a wacky weekly gaming webcomic by Katie Tiedrich. While many of the strips are stand-alone gags from various games such as The Legend of Zelda or World of Warcraft, the webcomic also features several recurring Super Smash Bros. characters living together in a building and dealing with various hijinks.

It once could be described as not actually having much to do with its title,note Unless you see it as a metaphor for being a not so extrovert someone who is socially awkward. until this strip

The comic is hosted by Hiveworks and available to read here

. There are also some pages exclusive to the author's DeviantArt gallery

She has also started to illustrate (but not write) a brand new webcomic called Aikonia, which can be found at this site.

In 2012, the author tried to raise money to print the comic book;

the Kickstarter was a runaway success, and ended at over a thousand percent funded.