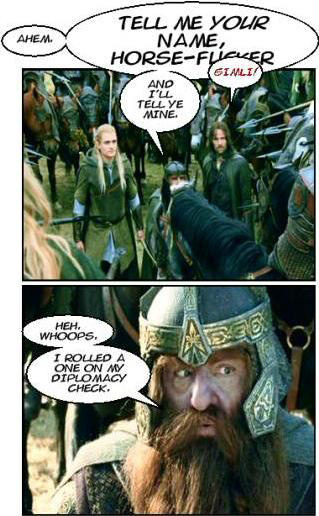 At least he didn't fail to roleplay the failure...
"You see, Fighter, any time you do anything, there is a one in twenty chance that you will critically fail. The results of such catastrophic events are up to the gods. Sadly for us, they are vindictive, and filled with bad ideas."
— Red Mage, 8-Bit Theater, "Very Long Range

Just as a Critical Hit gives a character a random chance of doing noticeably increased damage with an attack, a Critical Failure is the precise opposite: A finite, if sometimes suspiciously large, possibility that the attack will fail, be resisted, miss, or even backfire and hurt the attacker, regardless of any stat bonuses, upgrades, tweaks, or special equipment involved.

If being used on everything from swordplay to rock climbing, it may be a game mechanic meant to show the inherent danger in messing about with such dangerous things. Perhaps it's described as the unseen weak chink in the armour or the sudden gust of wind or the gods just being dicks that day. When used only on particular items or actions, it could be used to show how they are the riskier choice or contain some particular special power that must be paid off for with a special risk (see Awesome, but Impractical and Difficult, but Awesome).

The weapon of choice for the Killer Game Master, the bane of the Munchkin, and the source of mirth for The Loonie, Dungeons & Dragons' unofficial utilization of it as the roll of a 1 on a D20note the actual rules merely have the 1 as auto-fail, and only on certain rolls like attacks and saves (as a side note, those same rolls are also the only ones for which a natural 20 is an automatic success) is the Trope Namer and Trope Maker for many tabletop and video games based on role-playing. However, it has often been a factor in games of luck for much of time. The attempts of Game Masters to explain how a particular Random Number God-decreed critical failure 'happened' regularly stretch plausibility to make it an Epic Fail for the character responsible.

No matter how small or large the chance of their randomly cropping up in a given system may be, critical failures will almost inevitably have more of an adverse effect on the player characters than they will on the NPCs. After all, the PCs are the characters for whom the dice get rolled by far the most often — and as the main protagonists, anything bad that happens to them will also likely impact the game itself and the associated experience far more than just random anonymous orc #7 fumbling and dropping his sword.

Magic Misfire is one possible consequence or subtype. See also Luck Stat. Can sometimes result in a Critical Existence Failure, but the tropes are not directly related. Compare Randomized Damage Attack when a particular attack can deal a widespread random amount of damage, which may encompass such embarrassingly low damage so as to be called a "critical failure". Contrast Critical Hit.

Also known as a "Fumble".

Not to be confused with Critical Dissonance, which is when critics' opinions on a work fail to match the general public's, and Critical Research Failure, which is when a factual mistake is made.