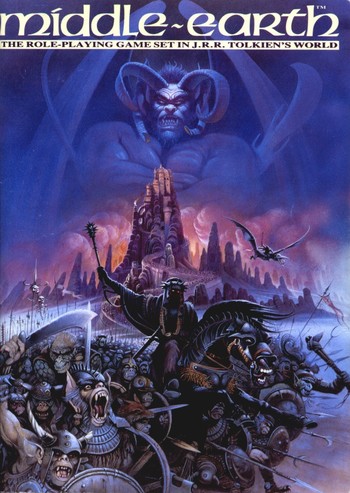 Middle-earth Role Playing (or just MERP) was a Role-Playing Game published by Iron Crown Enterprises from 1982 to 1996, using a streamlined version of the publisher's Role Master game rules. It was licensed from The Lord of the Rings and The Hobbit film and game adaptation rights holders Middle-earth Enterprises (then Tolkien Enterprises), a division of the Saul Zaentz Company.
Advertisement:

Set in the world of The Silmarillion, The Hobbit, and The Lord of the Rings, MERP allowed players to run campaigns in any era of Middle-earth's history — though the default era was the year 1640 of the Third Age, approximately a millennium and a half before the War of the Ring in a time when Sauron is only just starting to rebuild his power. The southern kingdom of Gondor is recovering from civil war, while the northern kingdom of Arnor is under siege from the Witch-king of Angmar. The Great Plague has just ended, drastically reducing the population in north-western Middle-earth but opening up new opportunities for the survivors. Sauron remains in hiding, but his servants, the Nazgûl, gather forces under his banner. The lands are less settled but also more free, and Elves, Men, Dwarves, and even Hobbits might find adventure.

Because its setting was relatively little-detailed by Tolkien, MERP was allowed a great deal of creative freedom and developed its own mythos derivative but distinct from Tolkien's, with a close attention to the languages and cultures of Middle-earth.

Notably there was far more magic extant in the default timeframe of Middle-earth than during the later events of the books — magic items were common and mages and other spellcasters were also a major part of the world.

MERP went out of publication in 1996 and the license reverted to the Tolkien Estate. Other Middle-earth RPGs have since been published by Decipher (The Lord of the Rings Roleplaying Game, 2002-2005, tying into the Peter Jackson movies) and Cubicle 7 (The One Ring, 2011-2020, taking place shortly after The Hobbit).

, which ceased publication in 2001. Other Hands was succeeded by an extensive fan module project

and the current webzine, Other Minds