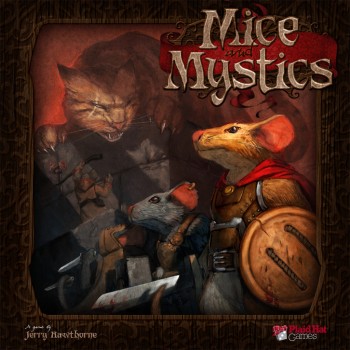 "Living in the walls lurk things that aren't nice,
That nobody knows of except for the mice."
Advertisement:

In the Kingdom of Men, King Andon ruled with justice and compassion, until the arrival of Vanestra, the mysterious queen of Darkhlend. Before long, the king fell sick with an unidentifiable and incurable illness. A cadre of loyalists to the king gathered and plotted to drive Vanestra from the land: Collin the prince, Maginos the mystic, Nez the tinkerer, and Tilda the healer. But, before they could put their plan into action, Vanestra's men promptly threw them all into jail.

At the suggestion of Filch the thief, they escaped from prison — by turning themselves into mice. And, though the transformation cannot be reversed, they must now find a way to defeat Vanestra once and for all.

Mice and Mystics is a cooperative Adventure Board Game with a few role-playing elements. It was published by Plaid Hat Games in 2012, and it was followed up by two expansions, Heart of Glorm and Downwood Tales, as well as two downloadable chapters, "The Ghost of Castle Andon" and "Cat's Cradle." You can learn more about the game and how to play it here.

Mice and Mystics and its expansions provide examples of: