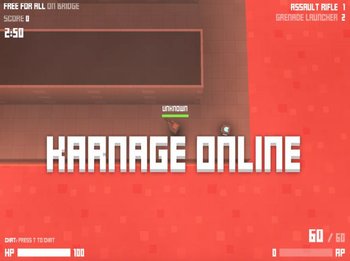 , or Karnage Online, is a free Web Game Top-Down View shooter, created by the Australian developer Sidney de Vries in 2017, as a successor to his first game, Vertix.io. Like its predecessor, it is class-based, carrying over many of the classes from Vertix with only minor changes. It also allows logged-in players to equip cosmetic items, join clans, or create their own. Both logged-in players and guests can also host custom games.

The main difference between this game and Vertix.io is that whereas Vertix was 2D with a Three Quarters View, Karnage is fully 3D, though it still plays similarly. Another major change is the removal of infinite reloads in favour of ammo crates. Armor system was introduced as well, and the armor kits are often placed on the small islands cut off by lava, so getting to them requires jumping - another addition. There's also a greater emphasis on the explosives, as nearly every class carries a grenade launcher as a secondary weapon, and Mr Ops class has its weaker version as a primary. Lastly, you can pick one out of five passive abilities on your loadout screen, and change them before every respawn.

In all, it plays a lot like a top-down version of Quake. In spite of the additions listed above, it is also more stripped-down than Vertix in several ways, as it currently has 6 classes instead of 10, and only 3 game modes next to the much wider variety in Vertix. Weapon camos are also its only cosmetics right now, with no sprays, hats or shirts like in Vertix. This is because Sidney soon realised that if he already made a 3D game, then he could outright create a First-Person Shooter. Thus, Krunker.io was born, and became far more successful than either Vertix or Karnage.