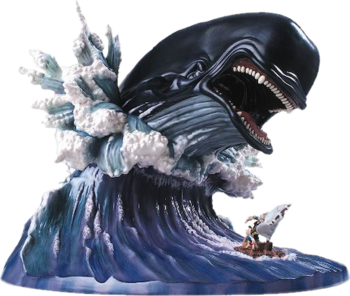 "This Monstro, I've heard of him! He's a whale of a whale! Why, he swallows whole ships!"
"We have no pity for these ferocious creatures. They are nothing but mouth and teeth."
— Captain Nemo, 20,000 Leagues Under the Sea, about the cachalot (sperm whale)
Advertisement:

Whales are the largest animals to have ever existed. Mysterious giants of the open ocean, they've spent millions of years swimming the seas, often as apex predators. In modern times, sperm whales plunge the depths of the ocean to hunt giant squids, and even baleen whales will devour enormous amounts of prey.

So it's no surprise that, for centuries, it was very common for whales to be portrayed as Sea Monsters. Creepily enigmatic at best and outright malevolent at worst, whales were frequently cast in a negative light. For centuries (even millennia in some places), the most common image of a whale in many cultures was a violent, ravenous beast that devoured everything it could and destroyed whatever it couldn't. Tales abounded of unlucky people being Swallowed Whole by whales, to the point that "Belly of the Whale" became a common metaphor to describe a dangerous and difficult to escape situation. Sperm whales in particular were hit with this image, due to how dangerous they were to hunt.

However, the general public's perception of whales has changed over the last few decades as a result of new scientific discoveries being made about them. In the 1960s, it was discovered that whales — previously thought to be mute — made vocalizations underwater. The 1970 release of the album Songs of the Humpback Whale helped re-characterize whales as intelligent, peaceful creatures that deserved protection, kickstarting the "Save the Whales" movement. As a result, whales are nowadays far more likely to be depicted as gentle giants, and even antagonistic whales tend to be portrayed with at least some sympathy. Unsurprisingly, portrayals of whales as brutal monsters have largely fallen by the wayside. While seemingly monstrous whales do still appear from time to time, they're now far more likely to be portrayed as benevolent or at least neutral (if sapient) or as acting like normal animals rather than ravenous beasts (if nonsapient). Even if a whale is portrayed as genuinely threatening, chances are it'll be the exception rather than the rule.

Given how old this trope is, it goes without saying that many of the examples are not particularly accurate to real whales. They may combine features of various species together — it's not uncommon to see a sperm whale depicted with the massive teeth of an orca and the grooved throat of a baleen whale, for example. It's also very common for these creatures, especially in cases where an individual whale or a specific breed is noted to be much more aggressive than normal, to be white. Other times, especially in older works from the Middle Ages and earlier, they might not look like whales at all, instead being an example of Informed Species. Check a medieval map, and you'll often find strange creatures with boarlike tusks and fish scales, only discernible as a whale by the waterspouts from their head.

Sub-Trope of Sea Monster. If the whale is large enough, this may overlap with Kraken and Leviathan. For other marine mammals portrayed in a similar light, see Monstrous Seal, Wily Walrus and especially Devious Dolphins (which negative portrayals of orcas fall under, despite them being popularly known as "killer whales"). Compare and contrast Space Whale, which takes the "big, mysterious swimmer" aspects of whales and puts them in space instead. Also compare Killer Gorilla and Cruel Elephant for other cases of a large, intelligent mammal being portrayed as scary.