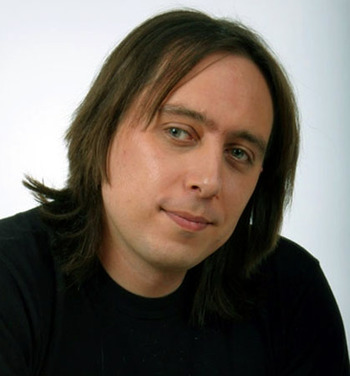 Oleg Divov (1968-) is a modern Russian writer, writing in a variety of genres (mostly hard to hard-ish science fiction and/or things about the military, but a lot of other stuff too). Has survived serving in the Soviet army in 1987-89, with many fond and not-so-fond memories (mostly the latter), as related in one of his autobiographical works ("The Weapon of Revenge"); afterwards, dropped out of his university and worked for a while as a journalist and a copywriter. And then he underwent a Creator Breakdown... sort of, as it was exactly then that he wrote his first major work (a novel called "The Dog Master", published in 1997). His literary career took off then and he is now one of the most famous and popular sci-fi writers in Russia.

Divov is known for a very neutral standing in book piracy policy. Unlike many Russian contemporary authors, his works are long-runners, steadily generating royalty despite quite wide presence in the relatively available pirate online libraries. In fact, he wrote a dystopia based on logical development of copyright laws.

Divov is the author of several novels. Those novels include, in chronological order:

Divov also wrote plenty of essays and stories of varying shortness. Some notable stories include:

And many, many others.

Some basic Divov and Divov-related tropes: