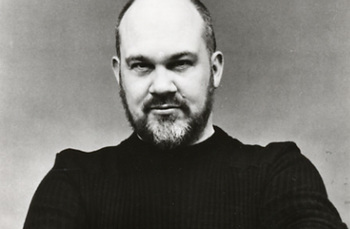 "Laughter is just a slowed down scream of terror."
— Thomas M. Disch
Advertisement:

Thomas M. Disch (1940-2008) was an American writer, poet, and critic. His early works were often bleak and nihilistic, with titles like The Genocides and Camp Concentration. It is therefore somewhat ironic that he is best remembered for his children's book, The Brave Little Toaster, which was made into a Disney film.

Disch's first novel, The Genocides (1965), attracted the attention of Brian W. Aldiss and Michael Moorcock, and soon Disch was a regular in Moorcock's UK magazine New Worlds, which was leading a literary movement that would soon become known as New Wave Science Fiction. Disch's success in the UK lead to him being selected to write a novel based on the quirky British TV show, The Prisoner.

In addition to his fiction and poetry, Disch worked as a theatre critic for the New York Times and The Nation. He later published well-received books of literary criticism. In the late 1980s, he also wrote for one of the last Text Adventure video games ever published, a work called Amnesia.