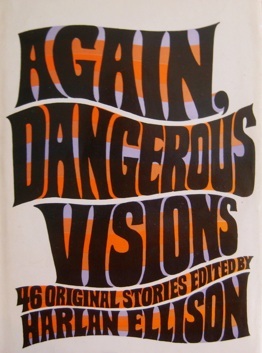 The sequel-anthology to Harlan Ellison's groundbreaking 1967 New Wave Science Fiction anthology Dangerous Visions. Due to the size of it, it has been released in two volumes (although originally in one).

Like Dangerous Visions, it also features introductions to each story by Harlan, who talks about the writer, and an afterward by the writer about the story.

The planned sequel to ADV would have been The Last Dangerous Visions, but, well... Harlan didn't like to talk about it (though Christopher Priest (novelist) is happy to

Tropes found in the Stories in Again, Dangerous Visions:

The tropes found in each story (as well as in the introductions and afterwords) are listed under the story in question.