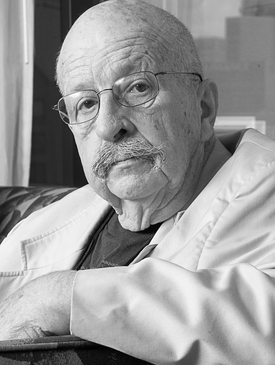 Gene Rodman Wolfe (May 7, 1931 – April 14, 2019), known as Gene Wolfe, was an undisputed genius in the fields of American Science Fiction and Fantasy. He is best known for his Book of the New Sun series. He has won the Nebula Award, Locus Award, and World Fantasy Award at least once each. He was the 2013 recipient of the Damon Knight Memorial Grand Master Award. His response, in part: "If you keep this up I'll start thinking I'm a good writer."

Other works include Peace, Free Live Free, The Fifth Head of Cerberus, the Soldier of the Mist trilogy, around a dozen other novels and dozens of short stories.

Hallmarks include unreliable first-person Narrators, and a facility for wordplay that ranges from the dense and clever (every smeerp-like word in a Wolfe story is an obscure but genuine word with an appropriate real meaning) to the amusingly straightforward: one of his short story collections is called The Island of Doctor Death and Other Stories and Other Stories, which includes "The Death of Doctor Island" and "The Doctor of Death Island" in addition to a story which is actually named "The Island of Doctor Death and Other Stories". Many of his later books and short stories have Catholic themes, as Wolfe himself was a Roman Catholic, although he was willing to show Catholicism twisted to evil or manipulative ends.

Fun fact: during his engineering career, Wolfe helped create the machine that makes Pringles potato chips. He said in retrospect he would have "made them thicker."

Works by Gene Wolfe with their own trope pages include:

Other works by Gene Wolfe provide examples of: