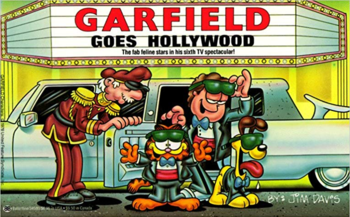 A sub-trope of Vacation Episode, where the characters visit Hollywood in Los Angeles, California.

This trope frequently involves at least one of the characters getting a (usually temporary) gig in the entertainment industrynote Usually a role in a movie or a TV-show (or both in some cases), it's likely a case of the writers writing what they know. Other stuff than can happen with this trope:

Sister trope of Viva Las Vegas!, another major touristy areas in the USA. Compare Who Would Want to Watch Us? for the inverse situation (Hollywood comes to the characters to adapt their adventures into an in-universe movie or TV show).