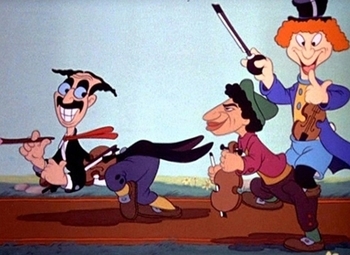 Mother Goose Goes Hollywood is a 1938 animated short film (8 minutes) from Disney, one of the Silly Symphonies. It was directed by Wilfred Jackson.

It does not have a plot but is rather a series of cartoon gags based on famous Hollywood celebrities of the day. The various scenes are all Mother Goose nursery rhymes as acted out by movie stars. Caricatures include Katharine Hepburn (as Little Bo Peep), The Marx Brothers (as Old King Cole's fiddlers), Charles Laughton (in his Mutiny on the Bounty costume), Spencer Tracy (in his Captains Courageous costume), W. C. Fields as Humpty Dumpty, Laurel and Hardy as Simple Simon and his pieman, Greta Garbo, Edward G. Robinson, Cab Calloway, Wallace Beery, Clark Gable, Fred Astaire, and lesser stars.