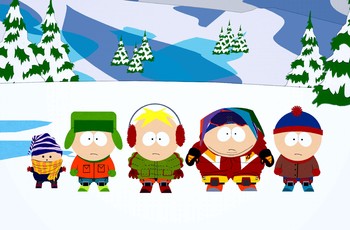 The Beach Episode is when the cast goes out in the heat and has some wet and splashy fun, but what if you want them to go out in the cold?

That's where the Ski Resort Episode comes in. This trope is often used for adult-aimed, urban-setted works where it wouldn't make sense for the cast to hang outside in the freezing weather, though some kids shows use it as an easy setup for Slapstick humor. Situations often include one of the characters dealing with a Jerk Jock skier, a character failing at going down the Obstacle Ski Course (where most of the slapstick ensues), and the protagonist getting in The Big Race down the hills, usually against said Jerk Jock. Expect one or more characters to get Stuck on a Ski Lift, typically with someone they despise. A Snowball Fight is likely too.

Ski resort vacation in the year 3000

Ski resort vacation in the year 3000