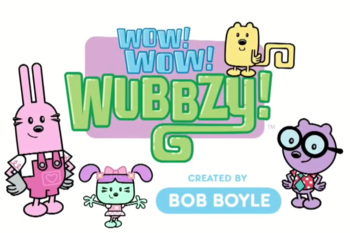 Wow! Wow! Wow!note That's Wubbzy on top of the logo, and below are Widget, Daizy, and Walden.
Advertisement:

Wow! Wow! Wubbzy! (2006-2010) is a children's animated show created by Bob Boyle (also known for Yin Yang Yo!) and animated using Adobe Flash. It was produced by Bolder Media and Starz. The show is named after the main character Wubbzy and his Catchphrase, "Wow! Wow!"

The show centers on Wubbzy, an anthropomorphic creature with a long, flexible tail. His best friends, the pink rabbit-like Gadgeteer Genius Widget, The Smart Guy who's purple, Walden, and (starting in season 2) the aqua-green Chick Daizy, often get in on the action.

Wubbzy premiered in 2006 and lasted until 2010. In the United States, the show aired on Starz Kids and Family and the Nick Jr. block. (In Canada, Starz licensed the show to Nick's rival Disney Junior, which aired reruns until 2015.)