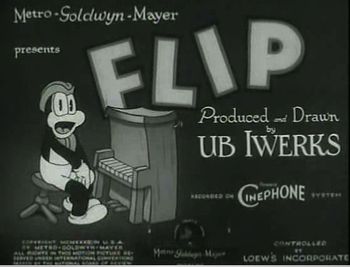 Flip the Frog is a classic Ub Iwerks cartoon from The Golden Age of Animation, 38 shorts originally produced 1930-1933 for MGM. Though no new material was produced later, the series received heavy TV play in the 1950s-1970s; today, modern DVD editions seem to have brought the series back into the public consciousness, if just for classic animation buffs.

Iwerks, who left Disney to launch his own studio, created an almost anti-Disney series in these tales of a down-and-out Funny Animal. Flip is typically seen either opening a new business or trying to find work, but ends up in trouble due either to interference from Depression-era threats or from his own clumsy nature. He constantly has problems with his Speech-Impaired Animal sidekick, Orace the mule; he is ridden by his boss, a stern but man-hungry spinster. Flip's own attempts to become lucky in love occasionally bear fruit in old-time melodrama style, but just as often a girl will end up dumping him, or even beating up Flip and his friends ("The Soup Song", "Room Runners"). And there is a lot of piano playing too.

Flip the Frog cartoons are almost the defining example of animation from the pre-censorship era. An angry Flip often reacts to trouble with a shout of "Damn!" Nude or scantily-clad women often appear, usually to place Flip in compromising positions. Innuendo is everywhere; in "The Office Boy," a sexy office clerk unwittingly walks around with a "private" sign hanging from her backside. Finally, typical cartoon violence has consequences: in "Puddle Pranks," a character is eaten by a monstrous bird and appears to die permanently (being chewed up and swallowed).

Flip the Frog shorts featured many tropes that may or may not have originated with Flip, but that generally were first seen in cartoons of about this period (and thus are Older Than Television). Many are Discredited Tropes or Forgotten Tropes. On a side note, Flip's first cartoon, "Fiddlesticks", was the first sound cartoon in color, predating even Disney's Silly Symphonies short Flowers and Trees.

Despite this, the series was a failure, unable to compete with Mickey Mouse or even Bosko, the Talk-Ink Kid in terms of popularity, prompting Iwerks to abandon the character and begin work on the ill-fated Willie Whopper and Comi Color Cartoons series.

Not to be confused with Flip the Bird, nor a completely unrelated web cartoon series by Eric W. Schwartz also called Flip the Frog, which, by Word of God, is directly inspired by Iwerks' tadpole.