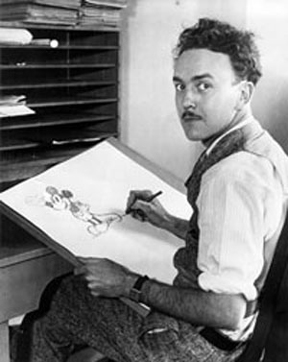 The Hand Behind The Mouse.note Or, in front, going by the context of this picture.
"The greatest animator in the world."
— Walt Disney
Advertisement:

Ubbe Ert Iwwerks (March 24, 1901 – July 7, 1971) (pronounced "Aub", not "Oobe" or "U.B.") was a prolific animator, director and technician, and had a very important role in the History of Animation, and particularly in the history of Disney shorts and films. He is recognized as the co-creator of Mickey Mouse, as well as his precursor.

Iwerks and Disney first met in late 1919, both trying to make a living as artists. While they had a brief stint together for the Kansas City Film Ad Company, Walt decided to leave and start his own studio in 1922, with Ub being the first man he hired due to admiring his drawing skills, to work on his earliest cartoons, the "Newman Laugh-O-Grams". Unfortunately, Walt's fledgling studio quickly went bankrupt, with Ub going back to the Kansas City company while Walt left for Hollywood to start fresh. Circa 1924, when Walt began work on his Alice Comedies, he quickly contacted Iwerks for help, resulting in a six year partnership with him.

Ub quickly gained a reputation among the earliest Disney animators for his drawing and animating skill – as Friz Freleng recalled, "At the time, just making a character move was an accomplishment. He could make characters walk and move; he could move a house in perspective. I thought he was a genius when it came to the mechanics of animation."

When producer Charles Mintz swindled the bulk of Walt's animators out from under him, as well as Walt's character Oswald the Lucky Rabbit, Ub was one of the three animators that stayed loyal to Walt, and left with him to form his own studio. In two weeks, Iwerks managed to crank out the first short starring a character that he had created with Walt – an early Mickey Mouse. More impressively, Iwerks managed to singlehandedly animate the entire cartoon in two weeks, animating as many as 700 drawings a day, beating a record set by another animator of the day, Bill Nolan. Soon after, Ub helped out Walt by animating the bulk of a prototype sound cartoon that would change the face of animation forever – Steamboat Willie.

Over the next year or two, Iwerks continued animating for Disney, as well as training many of the new recruits coming in. But tension soon rose between Walt and Ub due to issues with control over his work, with Walt wanting to retime Ub's work, much to his anger, among other issues. Upon being asked by Mr. Pat Powers to lead his own studio, Ub left Disney, dealing a crippling blow to the studio which had relied on him so much.

In the meantime, Ub started work on a new series of short comedies called Flip the Frog, obviously intended as something of an anti-Mickey Mouse. Despite being backed by a fairly good budget and a league of excellent staff, including top animator Grim Natwick, the Flip series failed to catch on with audiences, who favored Disney's own shorts instead. Ub tried again with an even shorter-lived series called Willie Whopper, which was once again a failure. During this time, Ub managed to build a prototype for what would later become the Multi-Plane Camera. Ub also began work on a series of independently distributed Silly Symphonies clones called the Comi Color Cartoons, but poor distribution and audience reception quickly sank the series after three years. Ub tried to stay afloat by having two Looney Tunes shorts, "Porky & Gabby" and "Porky's Super Service", outsourced to his studio, but after a seven-year run and around 77 shorts made, Iwerks finally had to close up shop.

Ub returned to Disney in the 40's to work on improving/introducing new technology for them (including a new matte system to allow live action/animation blending in films like Song of the South and The Three Caballeros. He also created the infamous Xeroxing process used in Disney's Dark Age films, starting with 101 Dalmatians) and did the same later in his life on hit films such as Alfred Hitchcock's The Birds, introducing a new matte system which allowed the titular birds of the film to appear on screen (since it was impossible to train all of those birds the way the film required them to do in live action).

He also contributed on various projects in the Disney Theme Parks including "It's a Small World", Great Moments with Mr Lincoln, and the Hall of Presidents.

If you're looking to find his work, check out the following:

You can find his life story, a documentary created by his own grand-daughter, Leslie Iwerks, on the "Adventures of Oswald the Lucky Rabbit" DVD. It is also available in book form.

Noteworthy shorts done by him:Real life people whom are influenced by him:

Tropes related to his career: