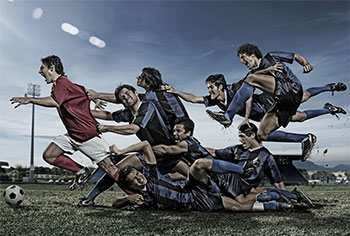 The villains of any sports series or movie, the Opposing Sports Team is the number one team before the main hero's eventual victory. They seem to be made up of Designated Villains and Villainy Free Villains, but they are not: they got to this point not because of Team Spirit, but because of either cheating and/or bullying and abusive behaviour or at the best of times a grueling, soulless regimen that goes against whatever the Aesop of the show is. They almost always wear a uniform that is mostly black. These may be to sports what the "Stop Having Fun" Guys are to video games; the types who play the game solely to win, and will resort to any means to do so.

Also seen in commercials as the side that doesn't endorse the main product, whom the hero defeats through Cereal-Induced Superpowers.

In 1980s and 1990s vintage sports movies, this team is the posse of bullying, snobbish, white private school rich kids, while the hero's team comprises ethnically diverse middle- to lower-class public schoolers and Lovable Jocks - making it overlap with Slobs Versus Snobs. Watch for a dirty scheme to close the neighborhood rec center, and lots of northeastern-accented trash-talk.

If the competition is international, expect the Opposing Sports Team to be either Soviet (Red Commies trained from birth in athlete factories and pumped on steroids) or German (hyper-efficient, arrogant, and we'll never forgive them for the war). For bonus points, they could be East German, combining both. Nowadays the reputation of the from birth athlete factory has largely shifted towards the Chinese, as Russia radically downscaled old Soviet youth sports programs, while China took this tactic and ran with it. In Chinese works and Cyberpunk stories however, there are chances that the opposing sports team will be Japanese, or even the white and rich kids aforementioned.

In competitive video games, they are generally considered SNK Boss teams due to how rampant they cheat to reach their goals. A single player has to use hidden skills or even bribe with real money to defeat them.

See also Technician Versus Performer. Jerk Jock is about individual athletes who are jerks, but there is some overlap, in that they have similar attitudes of cruelty, aggression, the acceptability of kicking dogs and abuse of all the privileges of being a winning athlete.