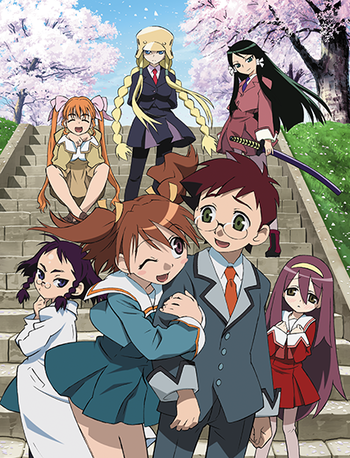 Kujibiki Unbalance originally started as a Show Within a Show within Genshiken. It is an intentional conglomeration of every anime genre and trope that the producers could cram in. Clips of it were animated for the original Genshiken series, and three complete episodes — the first episode, a Clip Show, and the second-to-last episode — were produced as an Omake on the Genshiken DVDs. They proved to be so wildly popular that the series was produced as its own standalone anime series, which aired in the Fall 2006 season.

The series follows a slate of four candidates for the Absurdly Powerful Student Council at an Elaborate University High. The school where the action is set has an unusual tradition: both the admissions test and the student council elections are chosen by lottery ("kujibiki" in Japanese). At the beginning of each year, the entire student body is divided into slates of candidates, who compete with each other through an enormous Tournament Arc of wacky Cooking Duel competitions. Naturally, there's a Love Dodecahedron at work, including a Childhood Marriage Promise between the protagonist and the current Student Council President.

The remade series, this time a complete one, is similar, but with a different art style, different group of candidates and a different setup for them to succeed. Rather than many groups competing, the next student council has already been decided, but in order to prove themselves worthy they must complete tasks put to them by the current council. These range from finding the last missing member in the first episode, to things like protecting the president from a bomb threat (and that's just the second episode). The DVDs of the remade series, in a role reversal, contain 3 OVA episodes of Genshiken.

It has now been released as a manga too, with a bonus section... where the remaining Genshiken members discuss the new manga.

Compare with Getsumen to Heiki Mina, another defictionalized Show Within a Show.

Tropes present in both versions:

Tropes from the OVA episodes: 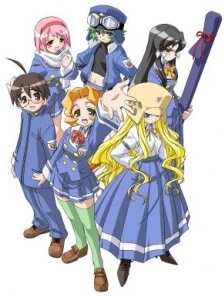 Cast of the original shorts.