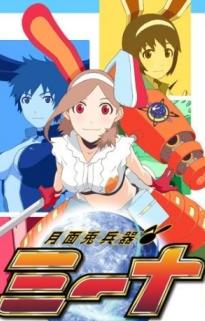 Originally a Show Within a Show in Densha Otoko, Getsumen to Heiki Mina soon became its own series. 20 Minutes into the Future, contact with aliens has been established. As it turns out, Earth Is the Center of the Universe for its culture. Specifically, sports. However, these aliens tend to take their sports fanaticism a little too far, and so to combat them the Rabbit Force, a team of vegetable and rabbit-themed Magical Girls, was born.

Mina Tsuduka is an Ordinary High-School Student who has finally achieved her dream of becoming a news anchor on Luna TV's Luna Sports program. When an attack breaks out, a mysterious bunny-eared creature in a peanut shell called "Nameless" tells her she can transform into a Mina, a member of the Rabbit Force. Hestatingly, Mina answers the call to become Tsukishiro Mina, and along the way meets up with several other Rabbit Force members.

Compare with Kujibiki Unbalance, another Show Within a Show that became Defictionalized.

Tropes in Getsumen To Heiki Mina include: