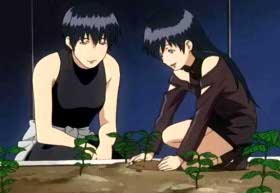 Kurau is a cheerful twelve-year old girl living on the moon with her father, a professor who researches a mysterious energy source. While watching one of her father's scientific experiments, she gets hit by an an energy blast which disintegrates her fully. Kurau reappears as the fusion of herself and an alien sentient force, calling herself "Rynax", and gains extraordinary powers, like flying; walking through walls; and shooting powerful blasts of energy. Rynax come in pairs however, so another Rynax lies dormant in Kurau's body, and the waking Rynax is unable to give it up.

Kurau's mind appears to have merged with the alien entity as well, to the shock and grief of her father. During subsequent experiments, Kurau's powers involuntarily cause the young girl to seriously injure her father, an event which proves to be very traumatic. Her father still deeply cares for his half-alien daughter, but decides that it is best that he and Kurau are separated, so he sends her to earth to live with relatives.

Ten years later Kurau makes a living by performing dangerous covert operations as a freelance mercenary, in which her Rynax strength comes in handy. She has to hide her powers from the public as to not attract attention from the GPO, an organization out to capture all "Rynasapiens", i.e. people affected with Rynax powers. Since her Rynax-pair hasn't found the strength to come out yet in all those years, Kurau also feels incomplete and utterly lonely.

Then one night, in a flash of light, her pair suddenly appears out of her body in the shape of a teenaged girl, who looks much like herself. Kurau calls her "Christmas" and her happiness knows no bounds, until she discovers that the GPO has found out about them. Kurau and Christmas have to run from the GPO, helped by Kurau's father and a mysterious ex-GPO member called Doug.

Kurau: Phantom Memory was pretty much a "sleeper" title when it was released in 2004, being overshadowed by other popular anime titles during that period. Since then it has gained a reputation as a classic though, with a heart-warming and dramatic plot, well-rounded characters and beautiful animation. It's a must-see for people who like their "hard" sci-fi to go along with believable human relationships.

These examples are released into the wide, wide world: