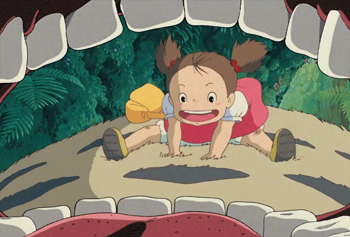 More a framing device than an actual camera technique, the "Mouth Cam" is a shot taken from a position that appears to be inside the mouth of one character as he, she or it faces or approaches another character. Most of the time, it is used when someone or something is about to or even is in the process of being eaten. It can be used for real horror if handled well enough. Or, a character could just be at a dentist getting their teeth checked.

Almost a Discredited Trope these days, although it continues to be used in all seriousness.

Compare "Jaws" First-Person Perspective. Contrast with Mouthscreen and technical opposite Eat the Camera.

The camera is positioned inside Dil's mouth during his incessant crying.

The camera is positioned inside Dil's mouth during his incessant crying.