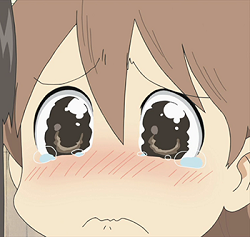 During times of emotional stress, a character's eyes, or just the reflected highlights in them, will shake perceptibly. The aim is usually to show someone on the verge of tears; as in, their eyes are pricking, or tears are welling, or something difficult to show otherwise. This is not usually a comedy trope, and can in fact mean that things have turned very serious. It may presage a Sparkling Stream of Tears if the situation gets worse. It can also indicate extreme happiness or love. When the irises shrink and shake, it's usually to indicate great shock and/or fear. Pretty hard (but not impossible) to replicate in Real Life. Best not to try, really.