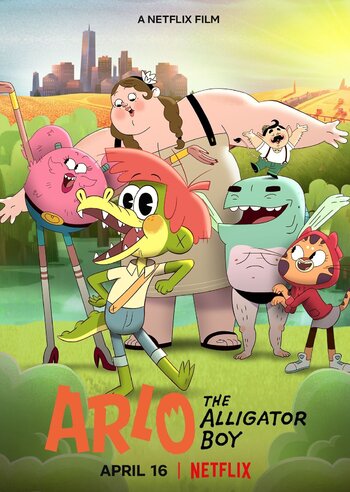 Arlo the Alligator Boy is an animated movie that premiered on Netflix on April 16, 2021, with animation produced by Titmouse. It's the story of a musically inclined half-human, half-alligator boy named Arlo who leaves his home in the swamp lands of Louisiana in order to find his father in New York City. Along the way, he makes many new friends, all of which are outcasts just like him.

The movie serves as the pilot to the series I ♥ Arlo, featuring Arlo's various adventures in New York with his friends, which premiered August 27 the same year.

Well, I know that I'm different, I wanna get out of here
Say my fate isn't written, don't even listen
Nothing to fear...

Arlo and Bertie give each other helpful advice in the case of nerves, which in turn cues their respective song numbers.

Arlo and Bertie give each other helpful advice in the case of nerves, which in turn cues their respective song numbers.