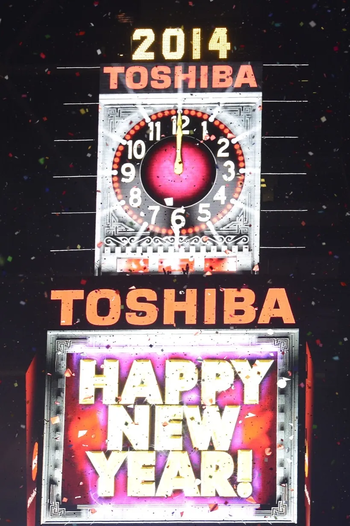 Drink and be merry!

As sure as the taxes, it comes at the end of every year: the New Year. Time for looking back, looking forward, and just going crazy. Time to celebrate and do all the things that for obvious reasons you couldn't do in the Christmas Episode.

Manga and anime love the New Year; in Japan, it's essentially the biggest holiday of the year (Christmas, which is the biggest holiday of the year in North America, is celebrated a bit differently there). This is where you can show all the girls and some of the boys looking good in kimono while making the traditional visit to the local shrine. Of course you can also dress some of them up as Miko (yes, some of the boys, too!) to manage the crowds and sell charms and fortunes to visitors. Or you can just let them stay up late to see the first sunrise of the new year—if they can stay awake, of course!

In Western media, often a source of date anxiety (and a New Year's Kiss!). Common things include big fireworks, lots of champagne, and the making (and inevitable breaking) of New Year's resolutions. And of course, a toast and the singing of "Auld Lang Syne" When the Clock Strikes Twelve. That's provided you can agree on whether it's the first or the last stroke which marks the change (it's the first). And that the characters can stay awake. In fact, both young and old characters may fall asleep before midnight, indicating immaturity for the former, and fatigue for the latter. In action-adventure shows, the plot will often involve a bomb set to go off exactly at midnight local time (often at the ball-drop in New York City's Times Square or the show's equivalent).

Some works use the new year as a natural starting and/or ending point for their stories. In series, it may be used as an excuse for a Clip Show.

Since the whole point of New Year's is the date turnover, it can be weird when this trope meets a work where the year is never given. If that's the case, expect the words "old year"/"last year" and "new year" to appear where the actual years would normally be mentioned.

The Greens and Gloria prepare for their New Year resolutions.

The Greens and Gloria prepare for their New Year resolutions.