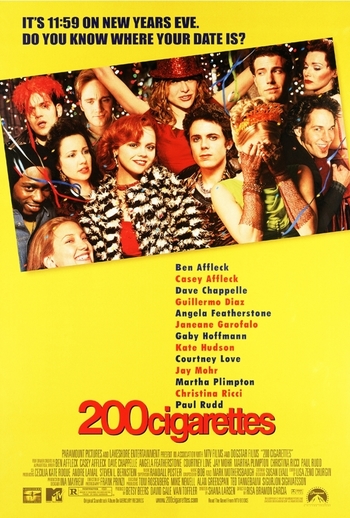 200 Cigarettes is a 1999 comedy set in the East Village on New Year's Eve 1981 surrounding various characters. In this film, Monica (Martha Plimpton) is throwing a New Year's party but thinks that nobody's going to show up, the only one who does show up initially is Monica's friend Hilary; best friends from Long Island Val (Christina Ricci) and Stephie (Gaby Hoffmann) get stranded in Alphabet City; Cindy (Kate Hudson) is on a date with her one night stand Jack (Jay Mohr); Lucy and Kevin are caught kissing by Kevin's ex-girlfriend Ellie (Janeane Garofalo); Bridget (Nicole Ari Parker) and Caitlyn (Angela Featherstone) who argue over Eric and then dumping him. Will they make it to Monica's party before midnight?

This movie contains tropes of: