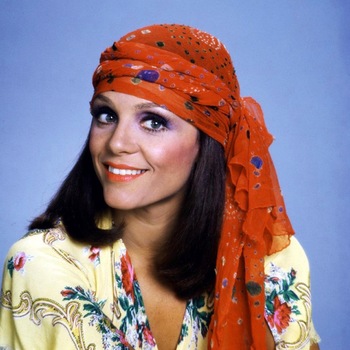 "My name is Rhoda Morgenstern. I was born in the Bronx, New York, in December 1941. I've always felt responsible for World War II. The first thing I remember liking that liked me back was food. I had a bad puberty — it lasted 17 years. I'm a high school graduate. I went to art school. My entrance exam was on a book of matches. I decided to move out of the house when I was 24; my mother still refers to this as the time I ran away from home. Eventually I ran to Minneapolis, where it's cold, and I figured I'd keep better. Now I'm back in Manhattan. New York, this is your last chance!"
—Rhoda Morgenstern, Opening Narration
Advertisement:

A Spin-Off of The Mary Tyler Moore Show that ran on CBS from 1974–78. Developed by that show's creators, James L. Brooks and Allan Burns, Rhoda followed Mary's best friend and former neighbor Rhoda Morgenstern (Valerie Harper) as she moved from Minneapolis to her native New York City to be with the man of her dreams, good-looking divorcé Joe Gerard (David Groh), whom she marries midway through the first season. Other characters include Rhoda's perpetually self-deprecating kid sister Brenda (Julie Kavner), with whom she initially shared an apartment; their parents, meddling Jewish Mother Ida (Nancy Walker) and Closer to Earth father Martin (Harold Gould); and the never clearly seen doorman in their building, Carlton (voiced by Lorenzo Music).

The show became famous as an example of the disaster that can befall a show when They Do too soon. CBS chief programmer Fred Silverman forced the writers to marry Rhoda to Joe as soon as possible, with the reasoning that getting her married at last would result in huge ratings. He was right about the ratings: the special one-hour Wedding Episode was one of the most-watched TV events in history. Unfortunately, however, the writers were now finding it increasingly difficult to write stories about a happily-married Rhoda, often instead writing episodes showcasing Walker's comedic performance as Ida, or focusing on Brenda's problems including her on-again, off-again relationship with accordion player Nick Lobo (Richard Masur). Eventually, they decided that Rhoda's appeal came from her status as an insecure single woman. A series of Retools thus ensued, with Rhoda getting separated and divorced from Joe, which caused the show's popularity to plummet. It managed to last for over 100 episodes, but it never got back the popularity of its early years. Even Silverman later admitted that having Rhoda marry Joe so soon was a mistake.