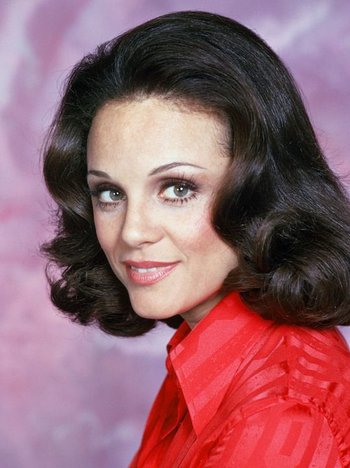 "I used to get some ego thing out of saying I wasn't a star, just an actress. Forget it. I'm a star. I wanted it. I worked for it. I got it."
Advertisement:

Valerie Kathryn Harper (August 22, 1939 – August 30, 2019) was an American actor best known for her role as Rhoda Morgenstern on The Mary Tyler Moore Show (1970–1977) and its Spin-Off Rhoda (1974–1978). For her work on Mary Tyler Moore, she won the Primetime Emmy Award for Outstanding Supporting Actress in a Comedy Series three times, and later received the award for Outstanding Lead Actress in a Comedy Series for Rhoda.

She was married to actor Richard Schaal and Tony Cacciotti and she had one child with Cacciotti.