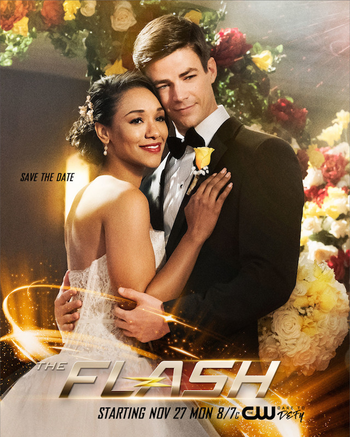 The fastest man alive slows down to start a family.
Serling: When have you ever been to a wedding?
Michelangelo: Been to? Never. Seen on TV? All the time! Every series eventually does a wedding episode, dude.
— Teenage Mutant Ninja Turtles (2003), "Wedding Bells and Bytes"
Advertisement:

This is when a show that isn't normally about marriage sends its characters to a wedding as the premise of an episode. Weddings in the beginning or middle of the work will usually be a supporting character's or a relative stranger's that the cast is roped into attending, while the lead's nuptials are usually reserved for the end. The premise of a Wedding Episode also varies with the work's genre and target audience — a kids' show might have the characters attend their first wedding and learn about marriage, a sitcom wedding will never go smoothly and the characters have to scramble around the requisite shenanigans, a romance story will inject as many twists and turns as it can, while an action-filled work might have it as a Breather Episode. Just note that to qualify, the episode has to be about a wedding.

Regardless of who's getting hitched, this allows the writers to dress up the cast, put them somewhere fancy and removed from the show's usual setting, and utilize as many hallmark Wedding and Engagement Tropes as they want. Mishaps with the ring? The bride's panicking because she's missing one of her Old, New, Borrowed and Blue things? The groom's getting cold feet and has to be coaxed to the altar? Someone interrupts the wedding? The Wedding Episode lets the characters experience all this and more, while allowing for the happy, romantic atmosphere associated with the ceremony.

In the late 20th century, a Wedding Episode was often a Ratings Stunt. It may overlap with Wedding Finale if the entire final installment or episode is centered around a wedding. An ending that only features the wedding at the very end, however, does not count as a Wedding Episode. Compare Dress-Up Episode, where the characters have to dress fancy for reasons other than marriage. Subtrope of Episodes.