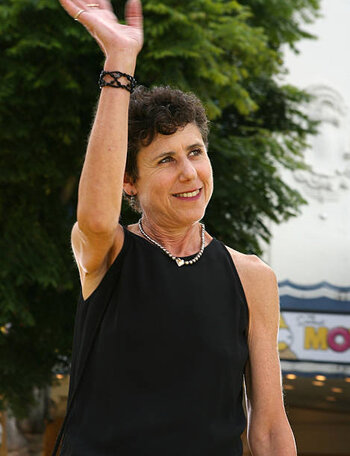 "When I was a kid I would get upset when people laughed at me when I didn't mean to be funny. I would always hear, 'We're not laughing at you, we're laughing with you.' But I would say, 'I'm not laughing.'"
Advertisement:

Although she first became recognized for her role as Brenda Morgenstern on the sitcom Rhoda, Kavner is most famous as the voice of Marge Simpson on The Simpsons. On that show she also plays most of the women on Marge's side of the family, including her twin sisters Patty and Selma,note or, as Homer calls them, "The Gruesome Twosome" her mother Jackie, her Great Aunt Gladys,note the relative who died in "Selma's Choice" and several unnamed relatives with minor roles in the Season 6 episode "Fear of Flying".note the one where Marge goes to therapy about her aerophobia while Homer gets banned from Moe's for playing a lame prank on him She has also appeared in six of Woody Allen's films.

Kavner has lived with television writer and producer David Davis since 1976.