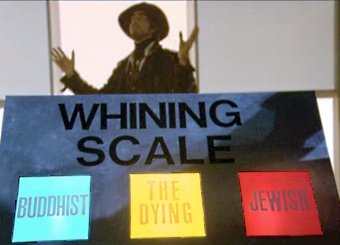 Hey, at least with the dying, their Earthly problems will soon be over. Jewish people still have to deal with...
"Jews don't sing and pray. They complain. And eat."
— Tom Levitt, Smash
Advertisement:

All right, all right! I'll describe Jewish Complaining here already! There, are you happy now?

Jews have a long, proud history of whining and complaining (aka, "kvetching"), or at least the Ashkenazi do. They will complain about many things, in many forms, whether it's Hypochondria (Oh God, can you catch something from writing that?), having to go to work, having to come home from work, paying too much for something, paying too little for something and worrying it's not good, their friends' bad habits, their friends' good habits, their Jewish Mothers thinking they aren't good enough, or the mothers themselves thinking their children aren't good enough.

This is Truth in Television and is actually joked about more among Jews themselves than anyone who's ever been prejudiced against them. Heck, if you see a TV show with Jewish people being big whiners, it's more than likely a Jew wrote those parts.

But when things get truly serious, the complaining tends to die down as they get more somber. This comes from the actual history of the habit: superstitious Jews believed showing happiness or satisfaction brought the Evil Eye, so they complained to ward off the demon world. Actual misfortune "fills the need" for misfortune in keeping demons away, and may well already have been caused by a demon, so why ward them off when they're already here?

Jews Love to Argue is a Sister Trope. Hey, a lot of arguing among Jews is often just them complaining about each other at the same time.

The Greeks do this too: it is called gana. Various Eastern European countries also have this practically as a national pastime. Same for the Irish. Germans and Austrians have perfected it into an art form, the political satiric cabaret. The French (both in French Canada and France) consider this their national sport.

Statler: I don't think that these Jewish people should complain about everything all the time.
Waldorf: I agree! That's our job!
Both: Doh-hoh-hoh-hoh!