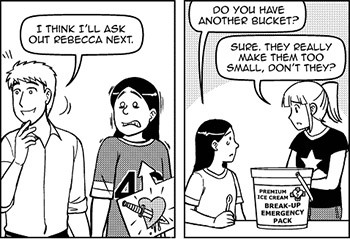 "Am enjoying a relationship with two men simultaneously. The first is called Ben, the other, Jerry. Number of current boyfriends: zero."
— Bridget Jones, Bridget Jones: The Edge of Reason (2004 movie)
Advertisement:

In fiction, a heartbroken, upset, or depressed character will often be seen eating a large quantity of ice cream, almost always straight out of the container rather than putting it in a bowl or cone first. The general rule appears to be that the size of the container is directly proportional to how sad the character is.

It may also be a sign that the character has "let themself go" if this behavior continues for several days or even weeks. If so, it will often be accompanied by other behaviors such as wearing pajamas during the day and refusing to leave the house (see Mess of Woe).

This sort of behavior also tends to happen with single women around Valentine's Day, even if they haven't experienced any recent rejections. Occasionally, ice cream is replaced with chocolate or some other sweet.

Also seen as a less dangerous alternative to heavy drinking.

A Sub-Trope of Comfort Food. A Sister Trope to Drowning My Sorrows. Compare Eating Solves Everything, where eating actually helps solve or get rid of a problem, and Post-Stress Overeating, where general stress leads to general overeating. Contrast Too Unhappy to Be Hungry, where the heartbreak would not cause the character to be reaching for the pint of ice cream in the freezer... or anything else.