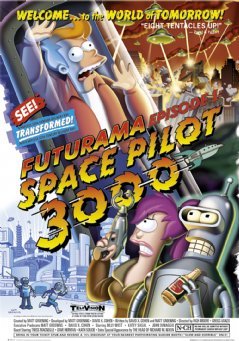 Pizza deliverer Philip J. Fry hates his life. He sucks at video games, has to deliver a pizza on New Year's Eve 1999, his girlfriend just dumped him for another person and threw him out of his apartment, and has his bike stolen without him knowing.

The pizza goes to someone named "I. C. Wiener" in a cryogenics lab, where Fry soon realizes that it was a prank call. He sits down and drinks one of the beers, toasting to "another lousy millennium." The bell tolls midnight and he unenthusiastically blows a noise maker when it knocks back in his face, causing him to fall backwards into a cryogenics tube. The tube sets itself for a thousand years and Fry is frozen. By the time Fry awakens, he sees that New York has become an extremely futuristic metropolis and immediately deduces that he is in the future. He realizes that he will never see his friends, family and girlfriend again (since they're all dead and gone)... and he couldn't be any happier (since they never really cared about Fry anywaynote though later episodes show that his brother missed him, his parents did care about him a little, and he left behind his faithful dog, Seymour), but soon realizes that he has nowhere to go and doesn't know anyone in this new world — until he meets a one-eyed purple-haired cyclops career counselor named Leela, a drunk, suicidal robot named Bender, and an elderly Mad Scientist said to be his great-to-the-umpteenth-power nephew with an intergalactic delivery company.

This episode of Futurama provides examples of...