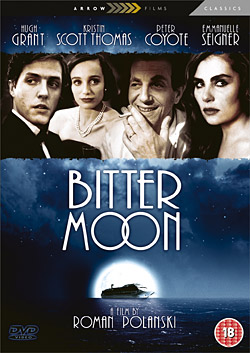 "A kinky voyage with a full head of steam."
Advertisement:

The film begins with British couple Fiona and Nigel Dobson (Thomas and Grant) encountering a mysterious French woman named Mimi (Seigner) and her crippled American husband Oscar (Coyote), who tells him their story of meeting, falling madly in love then destroying each others lives. The entire film takes place aboard a holiday cruise ship sailing to Istanbul.