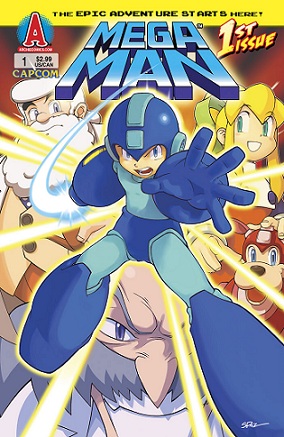 A Comic Book series based on the Mega Man (Classic) series, produced by Archie Comics and written by Ian Flynn, writer of Sonic the Hedgehog (Archie Comics). Unlike the Sonic adaptation, this one largely sticks to the source material when adapting the series, including elements from the obscure Game Boy titles and No Export for You titles like Super Adventure Rockman. The first issue was released in May 2011. In a similar vein to Sonic's Off Panel, this series features Short Circuits in the back, which is a short, comic strip style gag based on the events on the issue.

With issue #55, Archie put the series on hiatus. With the cancellation of Sonic the Hedgehog, that license moving to IDW Publishing and taking many of the staff from the Archie Action line with it, and Boom! Studios getting the rights for Mega Man: Fully Charged comics, it meant that the comic never came back from that hiatus.

Tropes exclusive to the comic: