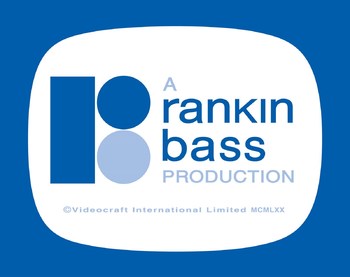 If you're an American and have had a childhood since the 1960s, then you know Rankin/Bass Productions.

Founded by Arthur Rankin Jr. and Jules Bass in 1960 as Videocraft International, the New York City-based studio is responsible for a series of animated holiday specials that are virtual fixtures of seasonal television programming. Such titles as Rudolph the Red-Nosed Reindeer, Frosty the Snowman, Santa Claus Is Comin' to Town, The Year Without a Santa Claus, and Here Comes Peter Cottontail have been shown more or less annually since they first aired, and many subsequent holiday specials produced by other companies will contain homages to these shows.

The general formula of these holiday specials was to take one or more classic holiday songs and to build a script (usually by staff writer Romeo Muller) around the music, featuring a celebrity narrator as an Ink-Suit Actor in the story and interspersing it with original songs with music by Maury Laws and lyrics by co-producer/co-director Jules Bass. Very likely a majority of the characters were voiced by Paul Frees. While some of the specials use traditional cel animation, most of them feature a puppet-based Stop Motion technique known as "Animagic".

Rankin/Bass also produced non-holiday Animated Shows. Best known is probably ThunderCats; its other series included Tales from the Wizard of Oz, The King Kong Show, The Jackson 5ive and The Osmonds. The popularity of ThunderCats resulted in two follow-up series, SilverHawks and TigerSharks (the third appearing along with three other shows as The Comic Strip). By the time of ThunderCats, the studios were now owned by Lorimar-Telepictures; Telepictures had acquired the studio in 1983 after distributing their post-1974note the pre-1974 library was owned by GE, who had owned Tomorrow Entertainment, R-B's parent firm, for a while then; they eventually sold the library to Lorne Michaels and his company, Broadway Video; he eventually sold it to Golden Books, who integrated it into their library, which eventually became part of Classic Media, which was sold to DreamWorks Animation in 2012. DreamWorks Animation would later be acquired by NBCUniversal in 2016, which GE had ironically owned a majority of at one point before selling to Comcast library from Telepictures' founding in 1978. Warner Bros. now owns the rights to those programs, having acquired L-T in 1989.

Its most ambitious projects were animated adaptations of J. R. R. Tolkien's books, with The Hobbit and The Return of the King. (Not to be confused with Ralph Bakshi's adaptation, which bridged the series.) Along with The Last Unicorn and The Flight of Dragons, these films were the first major U.S.-Japanese animation production crossovers. The co-producing Japanese company was known as Topcraft and soon after, they went on to form the company Studio Ghibli.

Although Rankin-Bass shut down in 1987, the company still manages its trademarks. In 2001, it released its latest holiday project, Santa, Baby!, which featured a mostly black cast. The duo also had a part in the ThunderCats Continuity Reboot. Nonetheless, Rankin/Bass will forever be remembered for virtually defining the concept of specialized holiday programming.

While Rudolph the-Red Nosed Reindeer and Frosty the Snowman still air annually on CBS every Christmas season, as does Santa Claus Is Comin' to Town on ABC, near the end of the 2010s, these specials would also begin airing on Freeform as part of their 25 Days Of Christmas block, including the 1968 special The Little Drummer Boy.

The company's lesser-known Christmas specials (such as Nestor the Long-Eared Donkey and The First Christmas: The Story of the First Christmas Snow) and followups (The Little Drummer Boy II, Rudolph's Shiny New Year and Frosty's Winter Wonderland) currently air on AMC for their Christmas block Best Christmas Ever. Sometimes the channel would air a marathon of Rankin-Bass Holiday specials during the weekends after Thanksgiving. Prior to AMC, these specials used to air on "ABC Family" (now "FreeForm") between the late 1990s and throughout the 2000s decade.

Shows Produced or Distributed by Rankin/Bass