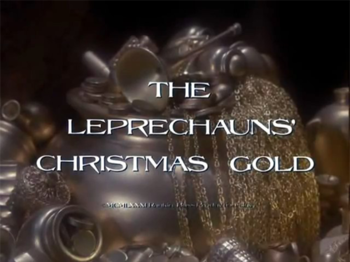 Christmas? St. Patrick's Day? Why not both?

Everyone knows, that rainbows end in gold
Guarded by leprechauns, so we've been told
And if you walk a hundred miles to where the colors all descend
Don't give up, my friend! There's been a million dreams about the rainbow's end

Young Irishman Dinty Doyle is a sailor on an Irish ship called the Belle of Erin. On Christmas Eve, his captain instructs him to sail to a mysterious island to dig up a pine tree sitting on the shore. Unfortunately of Dinty, it turns out that this tree was an enchanted tree, planted there by the leprechauns to seal away a dangerous banshee that seeks to steal their gold and run wild through the world. Speaking of gold, when the banshee summons a terrible storm, Dinty believes he's done for, only to discover a rainbow peeking through the clouds onto an unusual pile of shamrocks. The shamrocks part to reveal, to Dinty's awe, the leprechaun's Christmas gold. He also meets Blarney Kilakalarney (voiced by Art Carney), a leprechaun who guards the gold.

Dinty learns from Blarney that many years ago, the gold-mining Kilakalarney clan of leprechauns lived peacefully with the shoe-making O'Clogjigger clan. However, Mag the Hag, the banshee, desperate to steal the leprechaun's Christmas gold lest she be literally reduced to tears forever, drove a rift between Blarney and his wife (one of the O'Clogjiggers) by tricking the leprechauns into thinking that Blarney is hoarding their gold and will bring the clans to ruin unless they give it away. (Especially to Mag.) Blarney refused to give the gold, knowing it was Mag trying to trick them, so the leprechauns abandoned Blarney and the angry Mag broke their territory off from Ireland in an attempt to drown the leprechauns. Fortunately, Blarney teamed up with the Lord of the Leprechauns to trick Mag into becoming tears and being sealed beneath a pine tree, the same one that Dinty dug up not knowing that it sealed her. With Mag on the loose, Blarney enlists Dinty's help to protect their gold until Christmas Day, thus defeating the banshee, but will Dinty be able to?

One of Rankin/Bass's more obscure TV specials, The Leprechaun' Christmas Gold was the company's second-to-last stop-motion animated special and the last original story to be produced by the company for many years.

Tropes in The Leprechauns' Christmas Gold include: