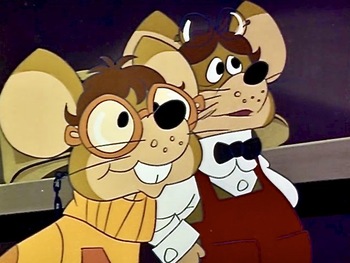 ...not even a mouse...
Advertisement:

This animated Christmas Special from Rankin/Bass Productions, which first aired on CBS in 1974, uses Clement Clarke Moore's famous poem as a hook for telling the story of one turn-of-the century American family and their Mouse World counterparts.

The plot begins when every piece of mail to Santa from the town of Junctionville comes back marked "Return to Sender." One family of mice investigates and discovers that Santa was offended by a letter to the editor published in the local newspaper which called him a fraud ("and the reindeer are phony too!"). Father Mouse (George Gobel) quickly realizes that his know-it-all son Albert (Tammy Grimes) and his friends wrote the letter (and signed it "All of Us"), bringing the wrath of Ol' Saint Nick down on the town.

In an attempt at damage control, clockmaker Joshua Trundle (Joel Grey) volunteers to modify the town clock into a singing clock in hopes of mollifying Santa. Things go from bad to worse when the clock publicly malfunctions during its debut, but in the end — with the help of a Heel–Face Turn on Albert's part — Santa has a change of heart and brings Christmas to Junctionville after all.

Unlike most R/B productions, this features 2D ink-and-paint animation, rather than their usual Stop Motion "Animagic".

Not to be confused with the 2004 HBO special 'Twas the Night.

The special contains the following tropes:

The Night Before Christmas

"Give Your Heart a Try"

The Night Before Christmas

"Give Your Heart a Try"