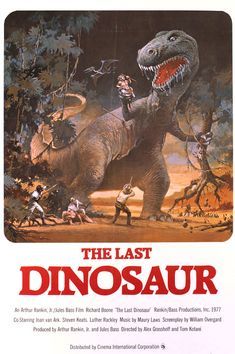 1977 action-adventure film in which a drilling expedition unexpectedly finds a Lost World deep below the North Pole. Big game hunter and oil tycoon Masten Thrust (Richard Boone) is determined to hunt his last and ultimate predator, a Tyrannosaurus rex that killed nearly the entire first explorer group. Ultimately the team becomes trapped in the Lost World and must try to survive against the T. rex and vicious cavemen.

You ding-dong! This is a list of tropes associated with this film: