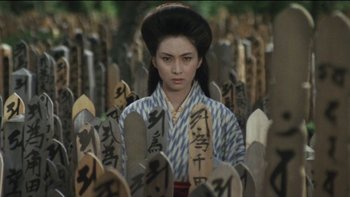 Lady Snowblood 2: Love Song of Vengeance is a 1974 film from Japan, directed by Toshiya Fujita, starring Meiko Kaji as Lady Snowblood. As the "2" in the title indicates, it is a sequel to the 1973 film Lady Snowblood.

In this one Yuki, aka Lady Snowblood, is apparently Walking the Earth after having completed her Roaring Rampage of Revenge in the first film. She is however a wanted criminal, being stalked by hordes of police and bounty hunters seeking to capture her. The film opens with her fighting off one police squad, and then later fighting off a second one, but eventually she basically gives up and allows yet another squad to bring her in. Lady Snowblood is convicted of 37 murders and is being led off to her execution when she is liberated by a raid of masked commandos. She is brought to Kikui, the head of the Japanese secret police. Kikui is willing to let Lady Snowblood off the hook, providing she carry out a mission. Lady Snowblood is to infiltrate the house of Ransui, a known leftist, while posing as a maid. Ransui opposes the militaristic, aggressive foreign policy of Japan that is in the ascendance following victory in the Russo-Japanese War. Lady Snowblood's mission is to retrieve a document in the hands of Ransui that could embarrass the Japanese government.

Lady Snowblood succeeds in infiltrating Ransui's household. However, she soon comes to admire her gentle boss, and supports him in his battle against the government—one that will come to a bloody end.