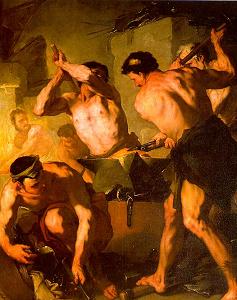 The Forge of Vulcan by Luca Giordano
"Arms for a hero forge; arms that require
Your force, your speed, and all your forming fire."
— Vulcan, The Aeneidnote As translated by John Dryden
Advertisement:

The hero needs a weapon. Maybe his ancestral sword was broken by the villain and needs to be repaired. Or maybe the weapon he has just isn't good enough. At any rate, he needs not just any sword, but the right sword.

And the right sword must be custom forged.

Thus, we get a Forging Scene. A skilled blacksmith, perhaps a magical smith or even the hero himself will take red hot iron (Thunderbolt or otherwise) and hammer it into a war-worthy weapon with his own two hands, making sure you see how much effort is going into making it and how beautiful the end product is.

All sorts of Artistic License is taken when depicting the process in visual media, usually by conflating steps that are actually supposed to be done in a very specific order. For example, you will often see a smith at his anvil hammering on a sword or piece of armor that is practically finished already—perhaps already fitted with a hilt if it's a sword—when in reality this kind of rough shaping is done before you grind or polish the piece and would ruin your work if you tried it afterwards. This liberty is probably taken to make sure that the viewer recognizes it as a weapon, rather than a scale-covered piece of iron. A more egregious example of such license is that sometimes a steel sword is shown being cast by pouring molten metal into a mold, when this technique was only used for making bronze swords. In general, as long as the process gives the artist an opportunity to depict flickering firelight and shadows and splashes of brilliant color—which is a major reason for having one of these scenes—the creators and audience will not over-think these details.

The heat of the forge is also conducive to Fanservice. Though female smiths are not unknown, the vast majority of these sequences will be conducted by some brawny male figure, largely due to the popularity of Hot Men at Work — and despite the obvious danger from spurting flames and shooting sparks, such a scene will often (as in the page picture) be conducted as a Shirtless Scene, as well. Can occasionally appear in a Hard-Work Montage because what can be more manly than burly men hitting hot metal?