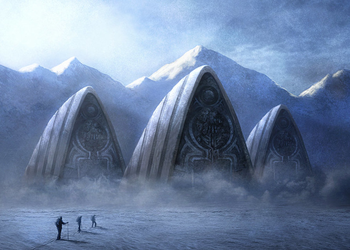 "Antarctica is the Last Continent, so everyone likes to think there's something mysterious out there: tribes of white giants, misty craters full of unconvincing rubber dinosaurs, cities of the Great Old Ones With Unpronounceable Names..."
— R. Kes, Plan 7 of 9 from Outer Space
Advertisement:

People have always wondered about what mysteries might lurk in unexplored regions. At first, it was just the place over the hill. As we explored more, the mysterious unknown was pushed further and further back, until eventually we had the whole of Earth's surface pretty much explored.

The last continent to be explored and mapped out was Antarctica, which was long suspected to exist but ultimately dismissed as myth until 1820, when it was finally, officially, sighted by humans. Even now, pretty much its entire surface has only been mapped by satellite. Incredible cold and lethal winds conspired to keep humans away, which made it a fertile area for stories about mysterious buried technology, aliens, and monsters. This trend continues today — after all, who knows what may be under the ice? In reality, what's under the ice seems to pretty much be... more ice.

As time goes on, of course, Science Marches On, and the more fantastical versions of this trope are just as Discredited as the presence of civilizations on the very definitely inhospitable Mars and Venus as portrayed in many an early Planetary Romance.

A particularly common variant is the Eerie Arctic Research Station, which despite the name applies to both the Arctic and Antarctic. See also Grim Up North (the polar opposite), Polar Bears and Penguins, Everything's Better with Penguins (hey, penguins live in Antarctica). And Human Popsicle, since Antarctica appears to be a good place to stumble upon Inhuman Popsicles.