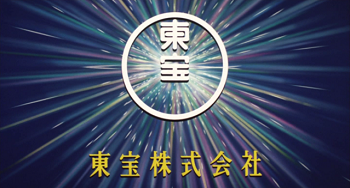 Founded in 1932, Toho Co. is basically responsible for the entirety of the tokusatsu genre by bringing us the King of the Monsters himself and other Kaiju movies.
Advertisement:

They actually have a lot more to their catalog of films, including many much more down-to-earth stories, but that's what most people remember them for.

That and Akira Kurosawa.

They also acted as distributor or co-producer for Studio Ghibli and many other anime films you may have heard of, as well as many of the live action film adaptations of anime that crop up from time to time (Nana, Space Battleship Yamato, etc). Not only that, their subsidiaries Toho-Towa and Towa Pictures exclusively distributes everything released by Universal and Paramount to Japanese cinemas, respectively.note NBCUniversal Entertainment Japan distributes them to Japanese home media. Toho also co-produces most of Universal and Paramount's films. Toho distributes through its own chain of cinemas

, reaching every metropolitan area in Japan. They also provided production facilities and some actors for the James Bond film You Only Live Twice.

Musical theatre fans may know Toho as the company behind many adaptations of foreign musicals, anime musicals, and original productions. Fun fact: Toho was founded as the Tokyo-Takarazuka Theater Company, by the same guy that founded the Takarazuka Revue. note Toho Co. and Takarazuka Creative Arts are under the same parent company, Hankyu Hanshin Toho Group. Toho used to manage much of musical theatre in Tokyo, until Takarazuka Creative Arts rebuilt the Tokyo Takarazuka Theatre and began using it as their second home for the Revue (five all-women theatre troupes). Today, Toho is behind a sizable percentage of mixed-gender Japanese musical theatre. note This includes shows that Takarazuka has done or would do: Elisabeth, 1789, Anastasia, etc. Many former Takarazuka actresses have gone on to appear in Toho musicals.

Not to be confused with Touhou Project, a Bullet Hell Video Game series.