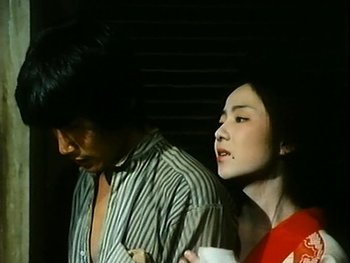 It is about the tragic life of a woman sold into sex slavery. In the present day, a journalist named Keiko is doing research on Japanese women forced into prostitution in the early decades of the 20th century. By chance she runs into an old lady, Osaki, who was sold to a pimp by her family in 1905. Osaki's story unfolds in a series of extended flashbacks. She was sent to a brothel in Sandakan

in British North Borneo (now Malaysia), and, after a couple of years working as a maid, was forced into service as a "karayuki-san

", namely, a Japanese prostitute working outside of Japan. Osaki suffers through a quarter-century of exploitation and misery, before finally returning home to Japan, only to find that the victims of sex trafficking are not welcome in their homeland.