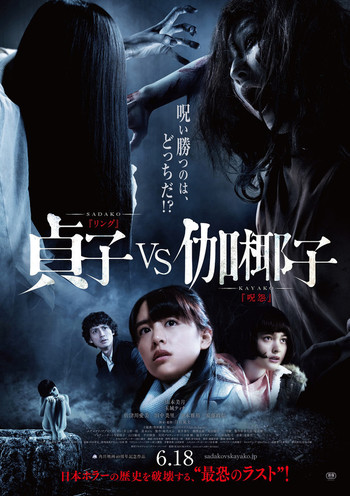 The most terrifying ghosts are about to be unleashed!
Advertisement:

Sadako vs. Kayako (貞子 vs. 伽椰子) is a 2016 Japanese supernatural horror film directed by Kōji Shiraishi. It is a crossover of the Ju-on and the Ring series of horror films. The film was first teased as an April Fools' joke on April 1, 2015, but was later confirmed on December 10, 2015 to be a real production. It was released on June 18, 2016 in Japan, with a streaming only western release on the service Shudder in 2017.

Two college students buy a second hand video recorder, discovering a copy of Sadako Yamamura's videotape inside. They watch it one after the other and are cursed by the girl from the well. Elsewhere, a high school student moves into a new suburban neighbourhood and becomes wary of the haunted house across the road. Curiosity gets the better of her and she ventures inside, only to face the wrath of Kayako and Toshio Saeki. Wanting to escape their curses, the girls turn to a medium and his blind assistant for help. The best course of action - to twice curse them with each other's curses, and pit Sadako and Kayako against one another.

Sadako vs Kayako contains examples of the following tropes:

Sadako and Kayako fight each other for the right to kill their charge.

Example of:
Evil Versus Evil

Sadako and Kayako fight each other for the right to kill their charge.