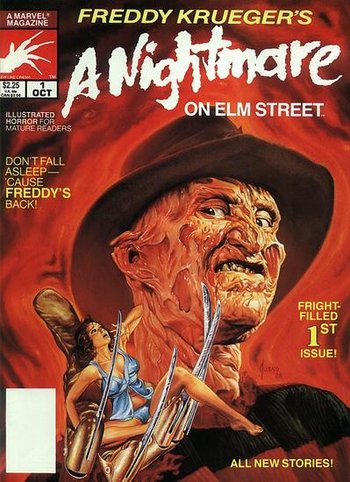 Seven, eight, better stay awake
Nine, ten, never sleep again
"They killed us. They got out. The Variants. You can't fight them... You have to hide... Can unlock the main doors from security control. You have to get the fuck out of this terrible place..."
— Stephenson, Outlast

Some monsters are Immune to Bullets; some are indestructible, barring the obvious Achilles' Heel; some smother their opponents in hordes of easily-replaceable drones; some just keep coming back no matter how thorough their demise seems... and then there's some that simply cannot be fought at all.

A native of the horror genre and its imitations in other genres, this breed of foe cannot be opposed in any reasonable way, lacking weaknesses, exploitable character flaws, or even opportunities to counterattack. The reasons for this vary: maybe it's because they're simply too powerful to be harmed in any way; perhaps they never give their victims a chance to retaliate; maybe its because they're effectively intangible. In some cases, it's because you're too weak to fight them and probably never will be strong enough to do any real damage.

Whatever the case, fighting the monsters fast approaching is out of the question: they can't be hurt, harmed, suppressed or negotiated with, and killing them is damn near impossible.

In other words, it's time to Run or Die.

Though hardly unique to the medium, this trope has flourished in video games. A popular way to enforce the survival part in many Survival Horror video games is to leave the player with no chance to survive (or make their time) in battle against the monsters; the moment the assailant catches up with them, it's game over, so the player's only option is to turn tail and run away as fast as possible. In many instances of this, the player will also be obliged to find a hiding place, turning the game into a tense mixture of stealthily creeping from bolthole to bolthole and desperately fleeing the unstoppable pursuer.

The modern prevalence of this trope can be seen as the antithesis of modern Action Horror games, which are oft considered to be little more than spooky shooting galleries rather than true "horror" games by purists. In this case, all the enemies are Invincible Minor Minions by default, and cannot be harmed in any way; in cases that allow these foes to demonstrate their invincibility should the player be brave enough to stick around and battle, a Hopeless Boss Fight may ensue.

Important Note: to qualify for this trope, the monster or villain has to be played for horror; a simple Hopeless Boss Fight in an action game does not count.

Astute readers may note that this trope has significant overlap with Invincible Villain. However, where the Invincible Villain cannot be defeated by anything including running away and always ends the story victorious, the Invincible Boogeymen are only impossible to defeat in confrontations; the latter can still be escaped or hidden from provided you're fast enough, and may even be defeated through the use of some special loophole in their invulnerability. Said weakness won't be discovered until the very end of the encounter, if not the very end of the story itself. Of course, don't count on this being a guarantee in video games; you're better off just running and never looking back.