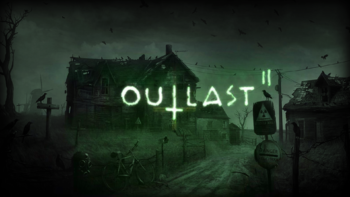 You think the first time was bad? This time, horror rises from desperation and blind faith.
"And there followed an angel, saying, 'Babylon is fallen, is fallen, that great city, because she made all nations drink the wine of the wrath of her fornication. And the smoke of their torment ascends forever and ever.' And I looked, and, lo, a Lamb stood on the Mount Zion. Saying with a loud voice, 'Fear God, give glory to Him; for the hour of His judgment is come.﻿'"
— Trailer Narration

The sequel ditches the setting of Mount Massive Asylum with its Bedlam House horror, and instead focuses on a variant of Hillbilly Horrors / Cult Colony. Protagonist this time is Blake Langermann, a cameraman for his wife and investigative journalist Lynn. The two venture deep into the Arizona desert, seeking the answer to clues behind the murder of a pregnant woman, only to stumble upon Temple Gate, a Jonestown-esque cult town headed by preacher Sullivan Knoth. After a helicopter crash, Blake is separated from his wife and is lost in Temple Gate, where he is soon attacked by the preacher's rabid hordes of insane followers.

It is followed by a prequel, The Outlast Trials.

Blake must find his wife, find out what the town is hiding, and escape with his life — if he can even manage to escape.