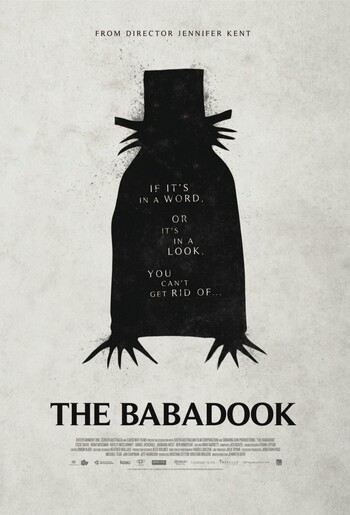 "If it's in a word or it's in a look...You can't get rid of the Babadook."
— Tagline
Advertisement:

The Babadook is a 2014 Australian psychological horror film directed by Jennifer Kent. Her feature directorial debut, the film is based on her 2005 short film MONSTER.

Amelia (Essie Davis) is a single mom whose husband died in a car accident while driving her to the hospital to give birth to their child. Six years later, she's struggling to raise their son, Samuel. Sam has some problems, in that he's still completely terrified of monsters under his bed and builds contraptions to help kill them. This keeps him up at night and, by extension, keeps his mother in a permanent state of exhaustion. Amelia usually reads Sam a book to get him to fall asleep, and that works almost all the time.

One night, after a particularly bad day, Sam wants to sleep in the same bed as Amelia (again), so she lets him pick the book to read. He picks a red pop-up book that neither of them has ever seen before to read. The book, called Mister Babadook, introduces the reader to the namesake character, a seemingly friendly monster that wants to be friends with the reader. He shows up at their door with a rumble and three sharp knocks — written as "ba BA-ba DOOK! DOOK! DOOK!" — and once he's let in, he'll eventually take off his funny disguise, and then you'll wish you were dead.

This terrifies Sam and aggravates his behavioural issues to the point where he becomes convinced that the Babadook is real and stalking them. Amelia denies its existence, and eventually tears up the book and throws it into the trash. However, the book returns to her doorstep days later, repaired and with brand new pages depicting a blonde woman not dissimilar in appearance to Amelia committing graphic acts of violence, all under the shadowy influence of the Babadook.

She doesn't take it very well.

Now has a Characters Sheet.