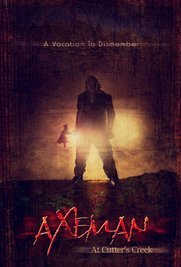 "A weekend to dismember"

Axeman is a 2013 Slasher Movie directed by Joston Thaney.

A group of campers go to Cutter's Creek for a weekend of fun. There's one problem, though: The local legends of a murderous axeman haunting the creek are true. Thus, bodies start piling up.