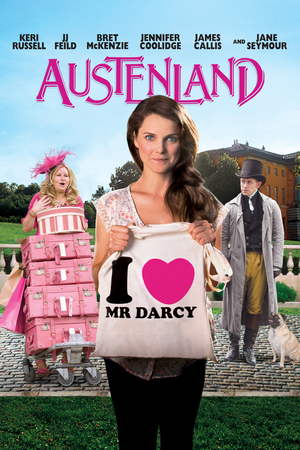 "I knew this place would be magical! They even got us a car from the 1800s!"
"I'm going to take charge of my story."
— Jane
Austenland is a 2013 film of the 2007 book of the same name by Shannon Hale. It stars Keri Russell, JJ Feild, Jane Seymour, Brent McKenzie, Jennifer Coolidge, James Callis, Georgia King, Ricky Whittle, and Rupert Vansittart.
Advertisement:

Keri Russell plays Jane Hayes, a dissatisfied 30-something American woman who is obsessed with Colin Firth's portrayal of Mr. Darcy in Pride and Prejudice (1995). Deciding American men simply don't live up to the standard set by Jane Austen's fictional love interests, Jane decides to spend her life savings on a trip to a British resort called Austenland, where visitors can immerse themselves in the Regency era (complete with fake names and gorgeous period dresses) and leave with a love interest at the end of their stay. Jane hopes to leave with her very own Mr. Darcy.